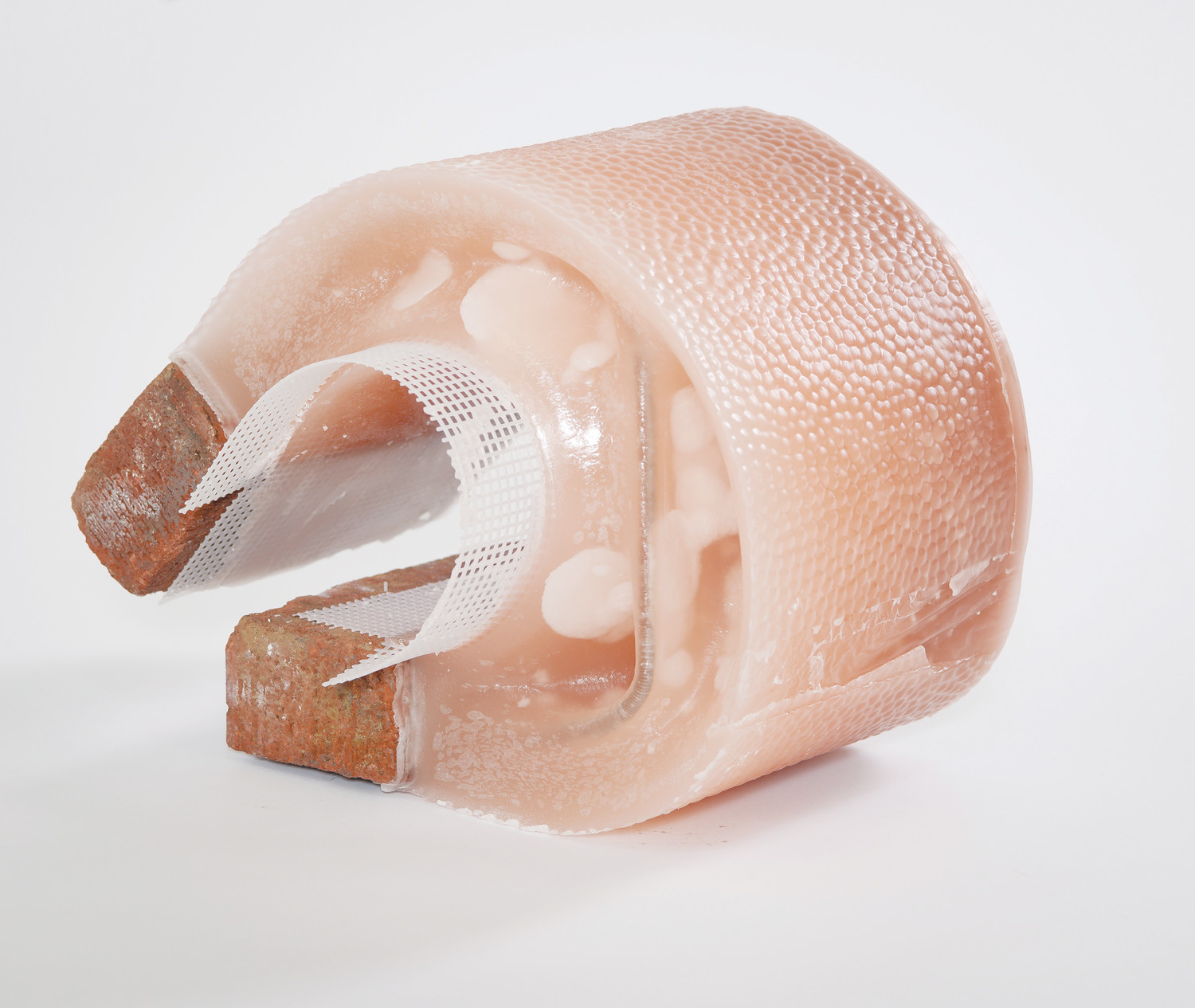 March 23, 2018 – Ivana Beck is the current visiting artist at Barton College. Originally from Serbia, she moved to the United States 15 years ago and has resided in Raleigh, North Carolina for 1 ½ years. Beck is a mother and a full-time artist who aspires to be a teacher as well. Her primary work is sculpture and three-dimensional creations using a variety of materials and techniques. After about a week, she has immersed herself in the student environment working with other individuals as well as personal projects of her own.

Her work is currently exhibited at the Barton Art Gallery in the show, Beyond Measure, are three-dimensional sculptures that include the use of primarily brick and wax. Her inspiration behind her pieces really focuses on the idea, the meaning, and the structure of home – specifically home in Serbia. The inspiration developed since she moved to the states and started thinking about home and her home country, Serbia. She thought about her daily life, the challenges and problems in life situations, and from there she thought about the physical meaning of homes. This led her to one of her primary materials: brick. Serbian homes are created from brick and the brick she uses in her pieces are those from deconstructed homes from Serbia. Beck continued to think about the function of the mortar and how it “glues” bricks together. She decided upon wax due to its flexibility and fragility; it was also a material she wanted to experiment with in conjunction with bricks. She used brick powder to help establish the color of the wax to resemble a fleshy tone. She stated her work was entirely exploratory and experimental. The results were often a pleasant surprise that embodied her ideas and what she wanted from the material.

Beck greatly relies on feelings with her work and this aids her in determining whether a piece is finished. She stated several factors that contributed to the finished work process; the primary factor was feeling. She explained, “Sometimes it happens – it’s rare – but it happens that I just make a piece in one breath sort of, and it’s fully there, the emotion, it’s fully there… it’s just a – it’s a feeling.” Other times the artist knows what he/she wants to achieve whether it is a specific emotion, idea, and/or what the artist wants viewers to experience. She further explains that she has to “live with the piece”, to constantly be around the work, to repeatedly look at it, to move it, and to take this time, which can be years, with a piece to decipher whether it is complete or not. Beck also asks others, like friends, to view her work to see if she achieved her goals to help decide if the piece is finished. She knows when something is missing, because she can feel it. “It’s all about feeling, there’s no specific formula.”

Beck has been working with students in the art department, specifically the Foundations II class. This class focuses on three-dimensional work and are currently under the instruction of Ivana Beck. The assignment consists of students choosing a song they like most and to select a 20 second segment from that chosen song. She then asks the students to think about ideas and what emotions may be involved with this song.  She had the students first sketch their ideas, then sketch them three-dimensionally, think about materials and their possibilities and physical characteristics, and finally to create a piece to demonstrate it. She encouraged the students to take the literal representation and, with the aid of research, create an abstract piece to help describe the feeling. Beck has also taught a workshop open to the community to explore materials and abstract ideas. She held a workshop Saturday, March 17 in the art department’s ceramics room. The workshop consisted of experimenting with brick and clay. She stated it was also a way for her to learn how brick and clay work together, because she never really worked with it, but planned to. She didn’t have any expectations of the workshop, but high expectations for herself as a teacher. She wanted to provide guidance and aid to those who attended. Beck confessed the Saturday workshop was her first “class” she as ever had. She expresses how she wanted to teach more and interact with students because she felt like it would be a good experience and it takes her back to her student days and struggles. It’s exciting to her and she loves that both student and teacher learn from each other. I attended the workshop and for the first time worked with brick and clay. Beck was very open-minded and encouraging to us. She was receptive to thoughts and ideas and really focused on creating pieces that explored the materials and the possible forms they could create. She holds another workshop Saturday, March 24 that involves carving cubes of clay and creating an abstract form.

Along with student involvement, Beck has been working on personal projects that involve creating brick within clay. Again, her work is often experimental and she learns from her experience as well as from others. She worked with Mark Gordon, a ceramics professor and artist, to learn how clay and brick work together.

Ivana Beck is an amazing artist and individual who focuses on her feelings and helping other artists to achieve goals and explore new materials and forms. When asked how she hopes to inspire students when she leaves Barton, she stated how she wanted to energize, inspire, and give students hope. She understands the difficulty working from two-dimensional to three-dimensional forms and wants to continue to encourage them as well as to take it one step at a time. She wants them to know, “They can do this.”