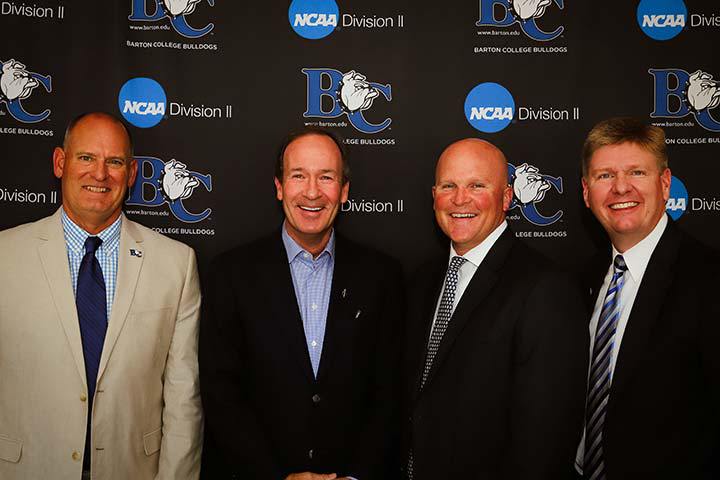 June 19, 2018 — The return of intercollegiate football to the Barton College campus for the first time since 1950 moved significantly closer to reality on Tuesday as school officials introduced the head coach who will lead the program’s revival.

At a public ceremony on the Aileen and Bill Parish Plaza, Barton College’s President, Dr. Douglas N. Searcy, announced that Chip Hester has been chosen to direct the BC program. Hester has more than 20 years of collegiate coaching experience at the NCAA Division I Football Championship Subdivision (FCS) and NCAA Division II levels, including 11 years as a head coach.

“Over a year and a half ago, the Barton College Board of Trustees made a very bold choice to bring football to Wilson and to Barton College,” Dr. Searcy said. “At that time, we said that one of the most important decisions that we would have moving forward would be the selection of the (head) coach – someone who would understand our community, understand the values of this space, who would put first the values of character and integrity, along with helping young men and young women be successful on the field, but more importantly, in the classroom.

“Today, we’re certainly excited to bring forward to you a coach who has all the experience in the world, as well as the excitement and enthusiasm to make sure that Saturday afternoons are successful,” he continued. “But more importantly, we look forward to welcoming Chip Hester into our community as a person who will guide young men and women across our campus, and who will be a mentor of faith and integrity.”

Hester, a native of Raleigh, coached the past four seasons at North Carolina A&T State University, including the last three years as offensive coordinator. The Aggies averaged better than 30 points per game in all three of his seasons guiding the offense, and racked up more than 400 yards per contest in each of the past two seasons.

The 2017 team ranked 10th nationally among FCS schools in points (35.1 per game) and 24th in total offense (426.8 per game) on its way to a perfect 12-0 record and Celebration Bowl victory over Grambling State University.

During Hester’s tenure as offensive coordinator, the Aggies posted a 31-5 record, won two Celebration Bowls, and made one FCS Playoff appearance. North Carolina A&T finished both the 2016 and 2017 seasons nationally ranked.

Before joining the staff at North Carolina A&T, Hester spent 18 years coaching at Catawba College. He served as head coach for 11 of those seasons, compiling an overall record of 70-49 (.588). He led the Indians to a first- or second-place finish in the South Atlantic Conference four times, and directed Catawba to three NCAA Division II playoff appearances.

“All athletic hiring searches have some non-negotiables – leader of young adults, fits the athletic staff and the Barton community, will engage with the Wilson community,” said Barton Director of Athletics Todd Wilkinson. “Then, we’ll take a look at recruiting experience, work ethic and the coaching background. Checking all the boxes at a high level, we found a perfect fit for Barton as a football coach in Chip Hester.”

He and his wife, Trish, have two daughters, Morgan and Tori. Hester will officially start work at Barton College on July 2.

“This is an exciting day,” Hester said. “I’d like to start by thanking President Doug Searcy, AD Todd Wilkinson, the Board, the faculty and staff, students, and community leaders. A couple of weeks ago when I was able to visit campus, I met with representatives from each of those groups, and I came away feeling like this was the kind of community that I wanted to be a part of.

“They say that it takes a village to raise a child, and I think the same way about this football program,” he added. “It’s going to take a village to raise this football program, and I think the village is in place. It’s a special place. I’ve done my homework. I’ve talked to people, and, across the board, there’s just such glowing recommendations about this place. I’m thrilled to be a part of it, and honored to be your head football coach.”